AlphaGo wins fifth game after not knowing a known tesuji


In the fifth and exciting last game of the Google DeepMind challenging match, deep learning AlphaGo played an impressive and very balanced moyo-building game. Even though Lee Sedol had substantial (secure) territory already early in the game and although he was able to thwart AlphaGo's huge moyo plans, the program succeeded in getting enough compensation to stay ahead by a small margin of just a few points. 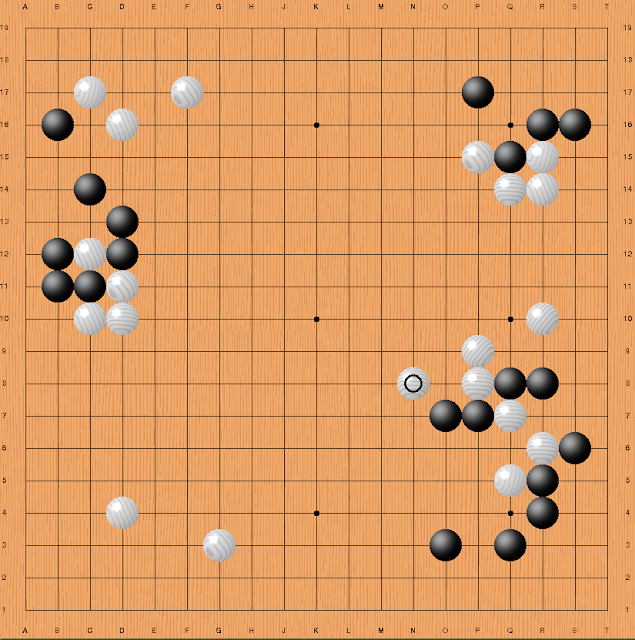 Both Lee Sedol and AlphaGo played a very solid opening and after move 40 (circle, white is AlphaGo) the outcome of the game appears completely open from their opposing forces of moyo and territory.

Then AlphaGo miscomputes the effectiveness of a tesuji and looses some points in the bottom right corner. Fortunately, it played those moves in territory already realized by black and it got some sente moves at the outside which would be quite handy if AlphaGo would want to turn it's moyo potential into real territory later in the game. 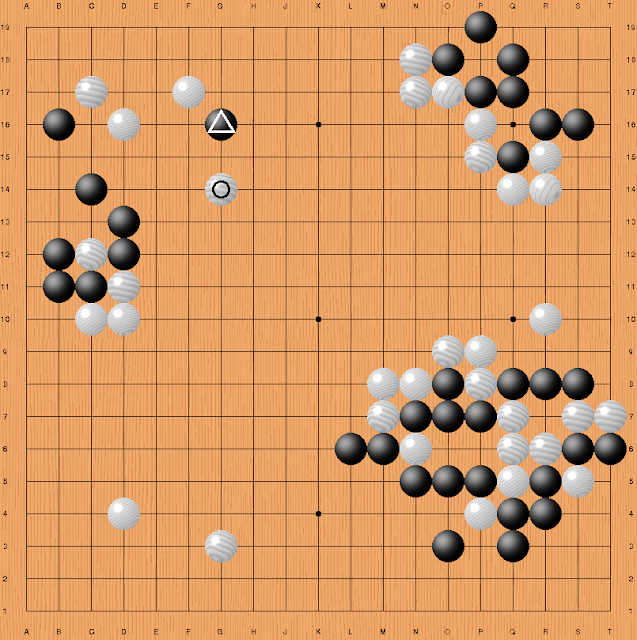 After Lee Sedol's move (triangle) to keep AlphaGo under pressure in the upper left while at the same time reducing AlphaGo's moyo potential around the center, AlphaGo came up with a great response (move 70, circle) turning around the flow of the game by putting high pressure on black. 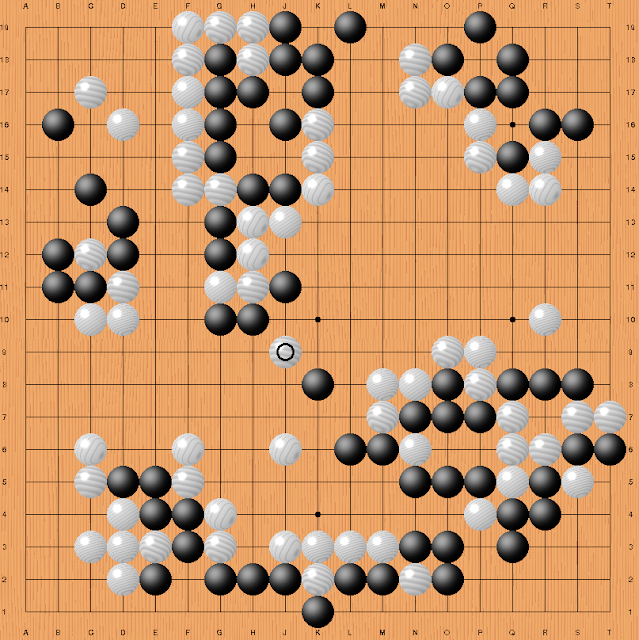 Lee Sedol needs to create a living group but in return, AlphaGo adds up strength to gradually help it's moyo building strategy. In a complicated middle game, Lee Sedol is forced to find efficient manners to prevent AlphaGo from realizing it's entire moyo by playing smart reduction moves. He succeeds but it comes at a price after AlphaGo plays a beautiful counter attack move (circle, move 136), putting again ultra-high pressure on Lee Sedol. 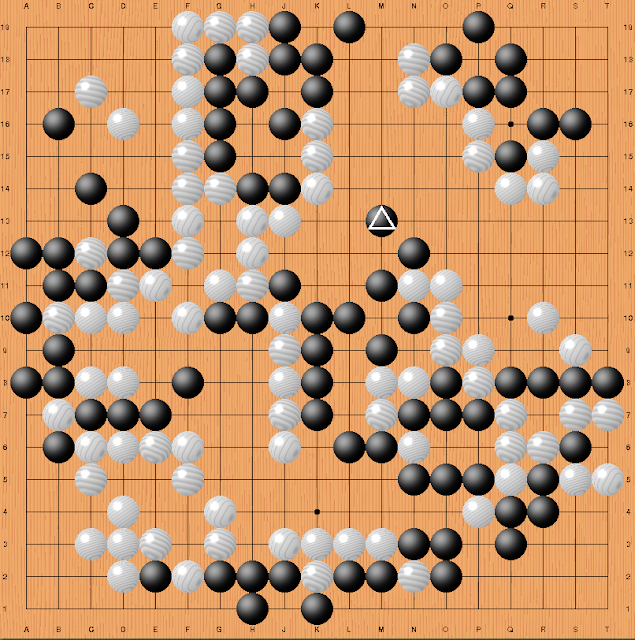 In the final phase of the game, Lee Sedol wonderfully manages to reduce most of the entire moyo built up by AlphaGo (triangle, after move 183). But, despite Lee Sedol's great moyo reduction skills, it is still deep learning AlphaGo that is ahead due to the sufficient compensation it got along the way.

For the top Go professionals commenting on this fifth game, it is difficult to say where Lee Sedol perhaps made a mistake. But one way or another AlphaGo managed to catch up again after falling behind when misreading a tesuji earlier in the game. Overall, the flow of the game and the way of playing, both of Lee Sedol and AlphaGo, seemed to be very balanced.

In the remaining 100 moves in the endgame, Lee Sedol was unable to overcome his arrears of just a few points. Even though he was ahead on the board, he would lose by about 2.5 points when including white's komi (7.5 points). This was the first time in the match a game developed so close in counting. 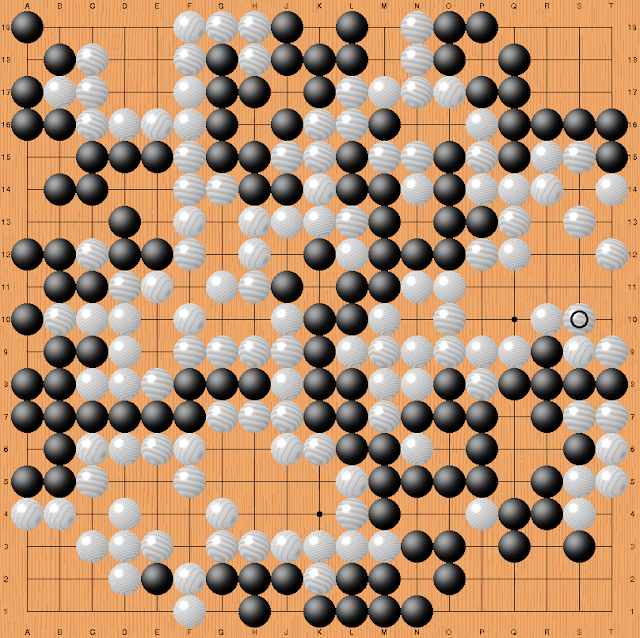 Lee Sedol resigned after move 280 (circle) while less than a handful of small endgame moves were left. This was another stunning and incredible exciting historic game where the distinctions in playing strength between the world's top Go-professional Lee Sedol and deep learning program AlphaGo during the match were most of the time very hard to discover.

So the final outcome of the match is: AlphaGo defeats Lee Sedol by 4 - 1. A result that only a small minority ( < 10-15%)  of the more than 100 million people worldwide who watched this match online, would have predicted in advance. AlphaGo has impressed all Go players worldwide with rock-solid, deep reading, sometimes unexpected and really wonderful, effective moves in these games. 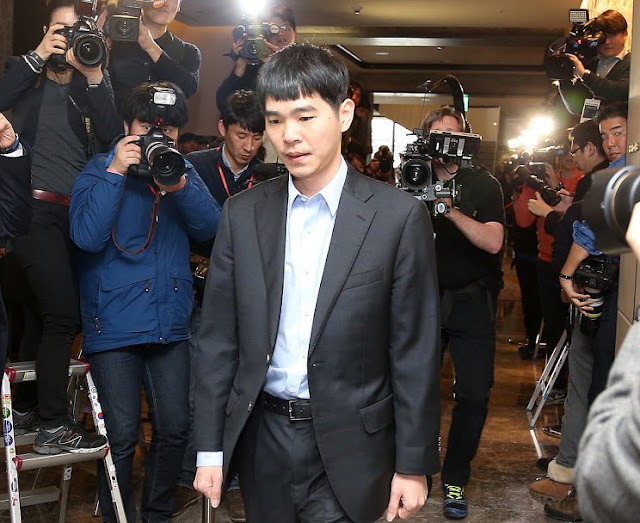 During the post-match press conference Lee Sedol said: "I am sorry because the match comes to an end". Answering a question about whether the five games might have changed his understanding of the game of Go, Lee Sedol responded: "Basically, I don't necessarily think that AlphaGo is superior to me. I believe there is still more that a human being can do to fight against the AI program. That's why I felt a little bit regrettable because there is more that a human could have shown during this match."

Lee Sedol concluded: "Enjoyment is the essence of Go. I do wonder whether I've always been enjoying the game but I do want to admit that yes, I did enjoy the games against AlphaGo. Creativity of human beings and also all the traditional and classical beliefs that we have had, well I've come to question them a little bit based on my experience with AlphaGo. So I've more studying to do down the road".

Commentator Chris Garlock remarked: "this match has triggered unprecedented global attention to the game of Go. We could not have asked for a more wonderful or generous gift to this game. The five historic and beautiful games of this once-in-a-lifetime challenging match will be studied over and over again in the years to come, launching what I'm sure is going to be a new era in the most ancient of games. I'm really looking forward to that".