Nearly all polls worldwide show the same result:   ~75 - 85 % of all voters is convinced that Lee Sedol will win the coming match against AlphaGo. This is also the prediction of the majority of the participants of a price contest among dutch Go players (over  ~105 participants, organised in cooperation with chess and go shop  'het Paard ' and an ICT company). 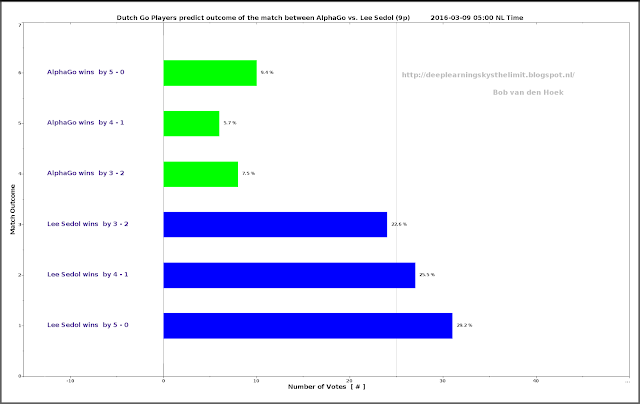 There are, however, many reasons to believe that AlphaGo, since the match about half a year ago, in which European Go Champion Fan Hui (2p) was beaten with 5 – 0, at least will play a few dan grades stronger against Lee Sedol. The estimated actual playing strength of AlphaGo is  ≥ 8th dan prof.

Despite all possible improvements of AlphaGo during the match against Lee Sedol, I expect that:


(*) as for example reviewed by a majority of 10 independent top Go profs (9p) from South-Korea, China and Japan.


And if you do want to make bets about this:  Deep Learning models are as good as the data you feed them.
Posted by Bob van den Hoek at 8:26 AM