At the press conference after the first game, Lee Sedol estimated himself to have a 50% chance of winning the second game. The main question is whether AlphaGo will play (now with black) as aggressive and offensive as in the first game.

You can imagine that Lee Sedol has adapted severely his playing style in multiple ways after losing the first game. In contrast, in the basis AlphaGo is unable to adapt in any way as training a new version of the program takes about 4 - 6 weeks. So it is not possible (and also not desirable) to apply important changes in AlphaGo's algorithms during this seven-day match (except in case serious bugs would occur).

Lee Sedol plays the first moves in any case more conservative and calm. According to commentator Michael Redmond (9p): "Lee Sedol perhaps has considered a slightly more careful way of playing considering how well AlphaGo has performed in the first game. However, in this game AlphaGo not only plays even more aggressive but it seems that the program also makes less mistakes".

AlphaGo's 19th move (circle in Dia. 1) is an equally astonishing as powerful move. Lee Sedol appears to be as surprised as everyone: he leaves the match table immediately, takes a (allowed) break while his clock remains ticking. Michael Redmond: "This is a creative move. It is a move which I believe I have never seen before in a top professional game". Virtually all AlphaGo's stones are cooperating together effectively with this creative 'shoulder hit'. 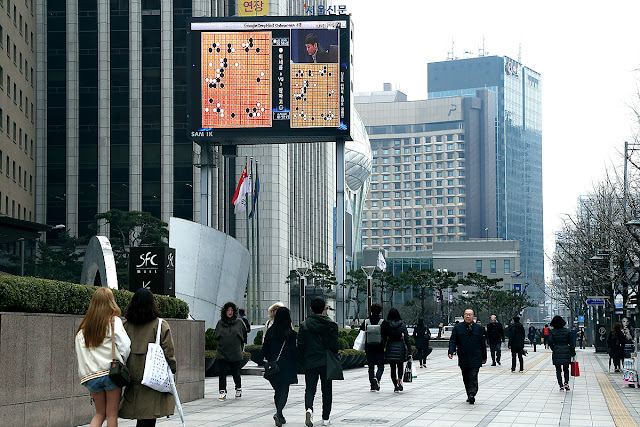 When Lee Sedol returns at the match table, he takes an unusually long time to answer and after only just forty moves in the game, he is already 20 minutes behind in thinking time compared to AlphaGo. Redmond: "He has clearly difficulties to handle such a strong move that he has never seen before. It is a new and unique move and Lee Sedol has to think about it. This is the reason why people become professionals".

Lee Sedol prevents AlphaGo to build up a moyo at the upper center and leaves the option open to make some territory himself at the right side. However, AlphaGo keeps the initiative and with black 41 (circle in Dia. 2) the program creates possibilities to play on one of the triangles (Dia. 2). Thereby Alphago can try to attack the white stones while making territory at the lower side. In addition, this move of AlphaGo helps to build the center moyo and prevents a white extension at the bottom side.

With AlphaGo's move 61 (circle in Dia. 3) it builds influence in the upper left center, provides some extension air to it's group in the center left (preventing white's attack), and threatens to invase white's group at the lefthand side (and to cut off a white stone). It is crystal clear that AlphaGo keeps putting pressure and controls the initiative.

AlphaGo seems not to worry about Lee Sedol's previous strengthening of his groups to prepare a fight at the upper edge. AlphaGo just continues building up it's own framework and, while doing so, exhibits an incredible flexibility.

In response to white's invasion (square in Dia. 4) black doesn't respond with obvious moves either on top or to the left of the invading stone, but instead plays a very solid move at the outside (triangle in Dia. 4), removing any weaknesses there so that black will have all his hands free to attack the invading stone much more heavily and aggressively later on.

AlphaGo still maintains the initiave and forces too choose between: a) extending to the center to make there a living group and neutralize black's strong influence in the center, and b) to make a small living basis in the upper left corner with the great risk that black will become rock-solid at the outside and with that strength can try to cash in the built center moyo (Dia. 4).

Lee Sedol makes the choice to attempt to neutralize the center but remains with a small heavy group without a base while AlphaGo takes points at both sides, strengthens it territory and tightens the pressure on the white group (Dia. 5).

White has no choice other than to persevere consequently but black keeps heavily attacking. And during this offense AlphaGo every time profits. With a next beautifully balanced attacking move (circle in Dia. 6) black prevents white from making eyes easily or can connect to the white group at the right hand side. And meanwhile black substantiates the center (which will be of benefit later on during the fight).

With determination Lee Sedol tries to solidify his center group and to prevent AlphaGo from making a mountain of points in the center but the white group remains shaky and stays a heavy burden to Lee Sedol (Dia. 7). While white takes points at the lower edge (square in Dia. 7), black calmly makes territory in the center (triangle in Dia. 7).

Redmond: "the control of the flow of the game has been alternated between the players several times. However, while fighting in the center AlphaGo played brilliant moves which forced Lee Sedol into immediate actions and choices". And while Lee Sedol seriously threatened the territory at the upper side, AlphaGo doesn't seem to worry and just cashes in points in the center: "points are points and it is completely irrelevant where on the board these points are taken" Redmond continues.

While attacking AlphaGo takes already a tank of points in the center by cutting off a part of Lee Sedol's group. White just has no choice: otherwise his whole group will die.

But even after white's big move in the upper right (square in Dia. 8) which threatens black's territory at the upper right edge, black plays calmly in the center. Thereby threatening to cut off another little tasty trail from white (triangle in Dia. 8).

Unfortunately, also in this situation Lee Sedol has to take eggs for his money and after another substantial bleeding is the white center group, meanwhile strongly shrunk, still not yet connected. AlphaGo keeps up the pressure and with black 11 the program plays a nice move that achieves many results simultaneously (circle in Dia. 9).

Again Lee Sedol has no other choice than to try connecting his stones without AlphaGo playfully kicking in even more points in the mean time.  Yet white looses once more some points. With black's forcing move (circle in Dia. 10) to cut again (triangle in Dia. 10), or even to catch the left over group in it's entirety (with a cut on O11 in Dia. 10) it is trying to empty the ocean with a thimble for white.

At this point in the game Lee Sedol is behind about five points (komi included) so if black is able to cut yet more stones from white's meanwhile disintegrated center group it is definitively end of story. And this is exactly what ultimately happens: white is cut off once more.

With this cut the game is over and Lee Sedol resigns about 50 moves later (see final position in Dia. 11), at that time he is about 10 points behind. AlphaGo did not relinquish control of the initiative at any moment in this game: Lee Sedol was defeated by the program in a rather straightforward and very impressive manner.

While Lee Sedol played some obvious overplays (a move that is too greedy to make more points than the opponent, more than could be considered as reasonable on the basis of your opponent's strength) in the first match, this game it is a completely other story: Lee Sedol didn't play any overplays and showed the very best of his Go play while seriously considering AlphaGo as one of his strongest opponents until now.

Several new and interesting moves have been conjured effortlessly on the board by a very aggressively playing AlphaGo. Some of which initially were regarded as unreasonable, incorrect, or simply not working.

In an exceptionally big fight during the second half of the middle game, Lee Sedol was put under enormous pressure (Dia. 6 en 7).With clearly much too little time to calculate accurately all favorable variations and outcomes in this extremely complex, never before occurring Go position. 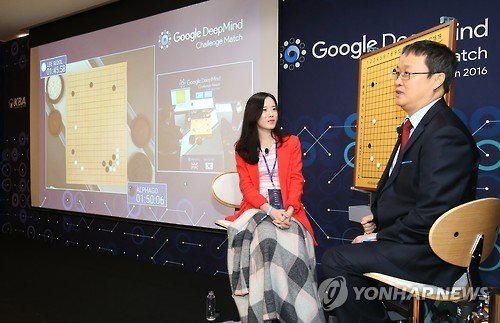 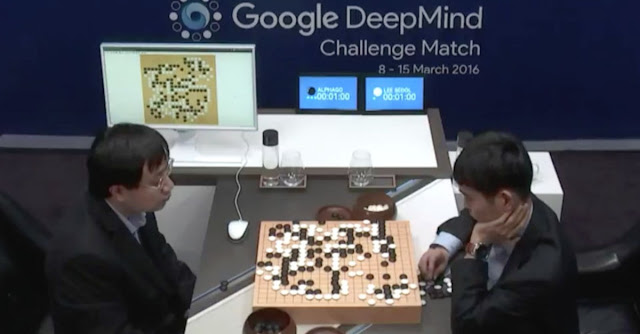 Regrettably Lee Sedol didn't succeed in finding a better alternative in this ultra complicated, misleading, unclear and confusing position. On that account he made the decisive mistake that gave AlphaGo a lead of about 5 points. At the deciding moment in the game (Dia. 6) Redmond suggested that Lee Sedol possibly was already somewhat behind. 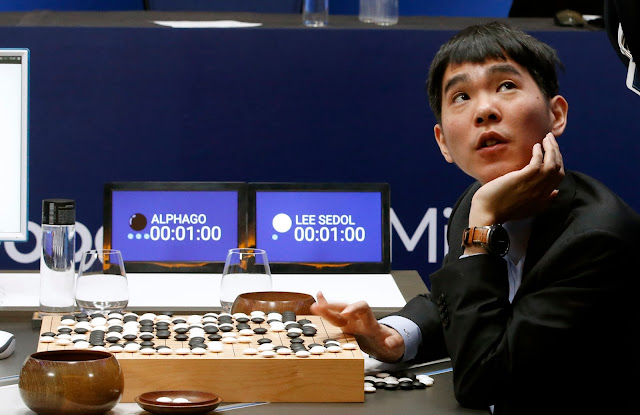 In the end, Lee Sedol quits while being defeated more or less with his own weapon: starting ultra complex, all-or-nothing fights and then to try getting decisive advantage during that battle. For many top professionals it remained unclear until the last part of the middle game what would be the outcome of this second game.

Demis Hassabis mentioned that from the second half of the game on, AlphaGo became more and more confident in victory from the midway point of the game (as is continuously monitored by it's probability theory of winning). Even though the professional commentators could not tell who was ahead at that stage in the game.

Lee Sedol explained afterwards: "Today, AlphaGo played a nearly perfect game: from the very beginning of the game I did not feel like there was a point that I was leading. While during the first game I was overwhelmed and surprised by AlphaGo's way of play, today I was startled and speechless about the extremely strong moves AlphaGo generated, some of which were unexpectedly well working out. Furthermore, AlphaGo, unlike yesterday, did not make any unreasonable or incorrect moves from the second part of the middle game until the end of the game". 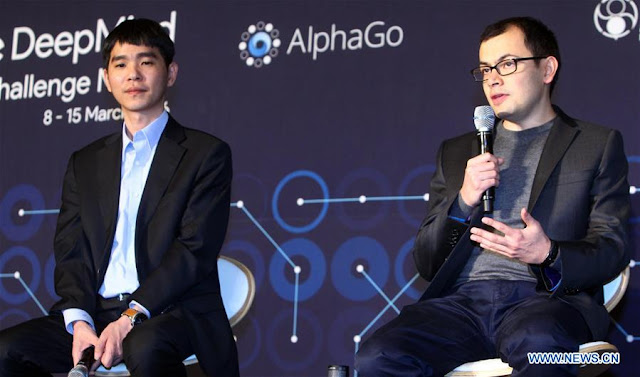 Go-prof Hong Minpyo (9p) confirmed that Lee Sedol and he afterwards have analysed every move of the second game for five hours. After the game, Lee Sedol was very confused about why he had lost this game. This post-game analysis and research  probably helped Lee Sedol to recover somewhat.

Today, AlphaGo apparently has beaten Lee Sedol with unprecedented accurate force power and incredibly profound computations during the most complex phase of the game. Reaching the point at which many human top professional Go players, including Lee Sedol, were unable to confidently calculate and reliably assess the outcome of the complex variations possible.

Lee Sedol remarked that in the upcoming third game of the match he will have to focus and concentrate on the opening and first part of the game, to seek and exploit any weaknesses of AlphaGo in order to build a lead early in the game. 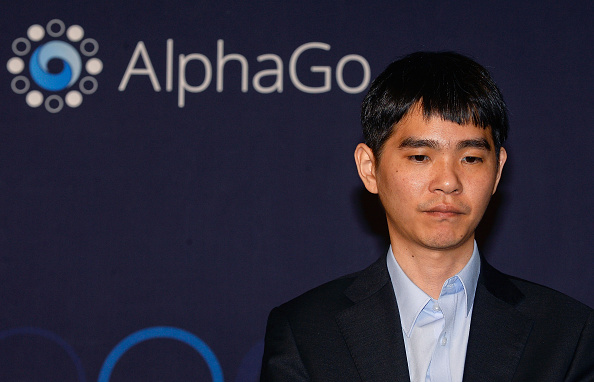 So now, after two incredibly fascinating and thrilling games of the match --despite their totally different type in nature both have been won by AlphaGo-- the real strength of the AI program becomes more and more apparent.

The chances of winning this match by Lee Sedol against such a magnificent and superbly playing deep learning AlphaGo seem to decrease rapidly (down to very improbable) after considering this astonishing, fascinating and breathtaking second game of the match. Today, again history has been written, both by Lee Sedol and the team of AlphaGo in many, irreversible, indelible, and unimaginable ways.

This must feel for Lee Sedol like he was hit by a relentless gravitational wave. Struck, overwhelmed, greatly saddened, almost destroyed. What would be in his mind after this second consecutive loss? At this stage in the match Lee Sedol deserves more than the very, very best and the deepest respect, support and admiration to overcome his great disappointment.


[Part 2: AlphaGo under a Magnifying Glass]


[Part 3: Lee Sedol about the Go board in his head]